Into China in search of Artemisinin 青蒿素 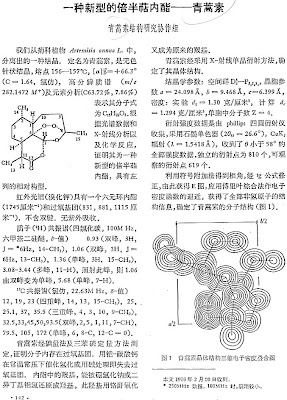 We finally reach China, after beginning our journey in Belgrade. This is the first scientific article to report on Chinese artemisinin research. It appeared in the journal Ke Xue Tong Bao 科學通報 in 1977. According to a footnote printed at the bottom of the article itself, it was received at the journal on 20 February 1976.

It's a one page article and I reproduce a picture of the page here. The title reads: "A new type of sesquiterpene lactone - qinghaosu". The body texts starts with the words: "We isolated a type of crystal from Artemisia annua. It was given the name qinghaosu." Then we get a mass of technical details about melting points and infrared, proton and C-13 spectra, that, frankly, would only be comprehensible to a physical chemist and certainly aren't comprehensible to me.

But I think a few things are still worth noting. First, the Chinese refer to the molecule as qinghaosu 青蒿素. They abandon Stefanovic's "arteannuin A" terminology, and they also don't cite Stefanovic, or anyone else, because the paper lacks references.

Second, the paper goes out under an anoymous authorship, namely: "Coordinating Group for Research on the Structure of Qinghaosu". There's no information whatsoever about who might be part of this group, or even how many members there are.

Third, unlike Stefanovic, I think the Chinese get the chemical structure correct. I would, however, appreciate the views of a proper organic chemist on this conclusion.

But there is something more. Unbelievably, they don't mention malaria! Essentially, they avoid telling us just about the most interesting feature of the molecule: that it can cure malaria. This is such a curious omission that it raises all sorts of interesting questions that I will discuss in future posts.
Posted by William Burns 江威廉