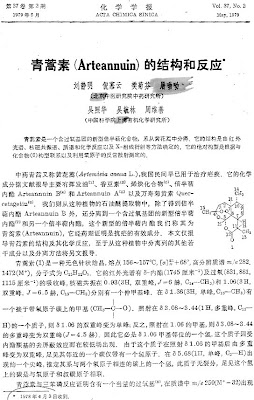 This is the big year - 1979 - when the Chinese announce their artemisinin discovery in detail, two years after the first brief report. And it starts in May 1979, exactly 29 years ago this month, with a paper in the journal Hua Xue Xue Bao 化學學報. It's quite a long paper, 10+ pages, so I only reproduce the first page.

There's a lot to discuss here, but I first want to point out that the authors submitted the article to the journal on 3 April 1978, a full year before it was actually published.

For the first time we have some actual Chinese names. They are: Liu Jing-ming, Ni Mu-yun, Fan Ju-fen and Tu You-you, at the Institute of Chinese Materia Medica, Academy of Chinese Traditional Medicine, Peking; and Wu Zhao-hua, Wu Yu-lin and Chou Wei-shan, at the Institute of Organic Chemistry, Academia Sinica, Shanghai. Here I'm using the original English transliterations that accompanied the paper back in 1979 (it was before the widespread use of pinyin).

So we can clearly say who the key players were. According to the standard format, where the leaders of the research go last in the lists of authors, they are: Tu You-you 屠呦呦 and Chou Wei-shan 周維善. Mark those names well, because it gets more complicated. I'm going to discuss these complications in later posts.
Posted by William Burns 江威廉