Discussion of the 1979 paper in the Chinese Medical Journal 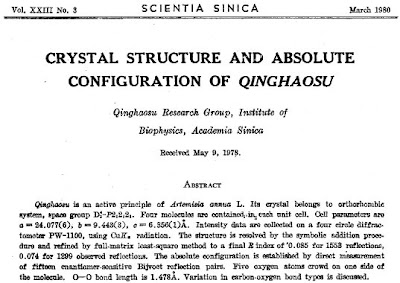 Here I'm continuing my discussion of the famous 1979 Chinese Medical Journal paper, in particular the references on the paper.

The first thing that strikes me: although the paper is entirely in English, the authors decided to keep the reference list in Chinese. To my mind, a very strange decision as the paper's intended audience, the international scientific community, can't (as a general rule) read Chinese.

The second thing to note is that references 1-8 are 1950s reprints of old Chinese medical books, or materia medica.

At the time, Chairman Mao made a big show of promoting Chinese medicine, so Chinese publishers made a big effort to revive the old books by reprinting them. This, by the way, is an interesting story in itself, and it's been documented by the historian Kim Taylor in her book Chinese Medicine in Early Communist China, 1945-63.

References 1-8 give me an excuse to wander off into an incense-filled world of temples, scholars and Daoists, but before I do that, I want to tackle the more prosaic issues brought up by references 9-10.

The question here is: why don't the authors cite the 1979 article by 屠呦呦 and 周維善? Could it be they were not aware of this article - or did they deliberately avoid citing it?

Reference 10 I think must refer to a paper submitted to the journal Scientia Sinica 中國科學 on 9 May 1978 and published in English in March 1980. I reproduce the original title and abstract of that paper here, but I'll discuss it at a later date because I'm trying to keep a roughly chronological order to these blog entries, at least in the first instance.
Posted by William Burns 江威廉