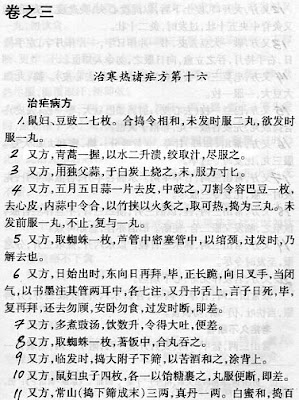 I reproduce the critical page from my edition of the book, published by Tianjin Science and Technology Press 天津科學技術出版社. Unfortunately I don't think this book has ever been translated into English.

Then we get a list of about 20 or so prescriptions. Prescription number two reads, in Elisabeth Hsu's translation:

Another recipe. Take a bunch of qing hao and two sheng of water for soaking it, wring it out to obtain the juice and ingest it in its entirety.

In the first instance, I think there are two points worth making.

First, the recipes are to treat nüe 瘧. In modern Chinese this character simply means malaria, but in Ge Hong's time, it must have been a less precise term. That said, the mention of chill and fever pins it down more precisely as these are typical malaria symptoms we know today.

The second point is more trivial: according to Elisabeth Hsu, two sheng was about 400 mL - about a cup of water - not one litre as is usually stated.

I followed Ge Hong's recipe using a handful of fresh Artemisia annua leaves from a plant I grew in my back garden. Squeezing, or wringing out, the leaves in the water produced a pale green-coloured liquid that had a very subtle herbal flavour (a bit like camphor, but not unpleasant). But it was so weak I can't believe it would have any effect against a serious malaria infection.
Posted by William Burns 江威廉