Citations in the early scientific papers 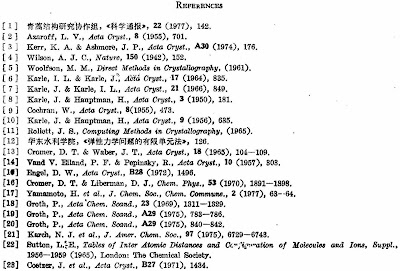 Now we are in the realms of Kremlinology, but lets proceed anyway to analyse the citations in the early Chinese papers.

What puzzles me is the inconsistency of citation in the following papers (papers that I've already mentioned on this blog):

What could be the explanation for these inconsistencies? It seems to me there are two possibilities.

First possibility: the authors of the 1980 paper - and we don't know their names because the paper went out under an anonymous byline of the Institute of Biophysics - didn't know about Tu Youyou 屠呦呦 and Zhou Weishan 周維善 and the other authors of the May 1979 paper.

Second possibility: we are in much darker waters, where the authors of the 1980 paper did know about Tu and Zhou but deliberately avoided citing them.

Either way, it would tend to suggest that, far from being a highly coordinated project (as it is often thought to have been), it was a bit disorganized, with different (rival?) groups publishing their results pretty much independently.
Posted by William Burns 江威廉