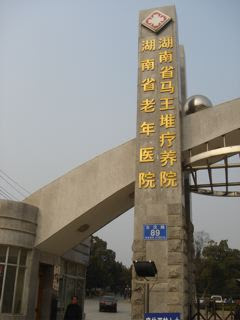 Well, time for a detour into the very ancient past, and reference number one in the Chinese Medical Journal paper. This refers to the medical manuscripts excavated from Ma Wang Dui 馬王堆 at Changsha 長沙 in southern China.

I used to have a copy of the manuscripts, or rather Donald Harper's English translation in his book Early Chinese Medical Literature, but I seem to have lost it somewhere.

If I remember rightly, there was a lot of discussion about herbs that could improve a man's sexual performance, and the best sexual positions for "approaching the inner chamber". All in all it was a rather racy read for something that's nearly two thousand years old.

But the point here is that it mentions a herb called qinghao 青蒿, not as a sex aid, but to treat hemorrhoids - the manuscript advises the reader to expose his bum over a steaming concoction of the herb.

It's the first mention of qinghao in history, and a rather undignified one at that. But the herb is said to have been Artemisia annua. A stretch of the imagination perhaps, but not completely implausible.

Curious about the tomb itself, I visited 長沙. The first must-see is the Hunan Provincial Museum, which houses the artefacts from the tomb.

The second, more obscure, tourist attraction is of course the site of the tomb itself, ironically in the grounds of a hospital. Here's a picture I took of the hospital's entrance. The sign reads: 湖南省老年醫院, 湖南省馬王堆療醫院. In other words: Hunan Geriatric Hospital, Hunan Ma Wang Dui Hospital.

The name Ma Wang Dui literally means King Ma's Mound, but actually the tomb contained a Chinese nobleman, his wife and son and a thousand-and-one perfectly preserved artefacts. They were all sealed in giant wooden coffins that protected them from the elements.

Among the artefacts, which included musical instruments, clothes, statues and furniture, the archeologists found manuscripts written in black ink on strips of bamboo and on sheets of silk, and that is where the characters 青蒿 appear for the first time.
Posted by William Burns 江威廉