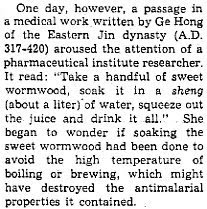 My next stop is Ge Hong 葛洪, or reference number three in the Chinese Medical Journal paper.

While the Ma Wang Dui manuscript is merely a historical curiosity, this reference is said to be directly related to the discovery.

I've scanned an excerpt from an article in the magazine China Reconstructs - now known as China Today - that was published in August 1979 and throws a little light on this part of the story.

The sweet wormwood mentioned must be qinghao. In other words: Artemisia annua.

In those days China Reconstructs was the main English-language organ of the Chinese Communist Party, and it was edited by a Western journalist called Israel Epstein who had defected to China in the 1950s and was actually a Chinese citizen.

Incidentally, the paragraph excerpted here comes from an article written by Ximen Lusha. It doesn't sound like a Chinese name, but Hubert Wang from the English Department at China Today told me that Ximen Lusha was a Chinese woman. I don't have the characters for her name, so it's really difficult to find out anything about her, or even if she's still alive. I wonder if there's anyone out there on the Web who could tell us more?
Posted by William Burns 江威廉