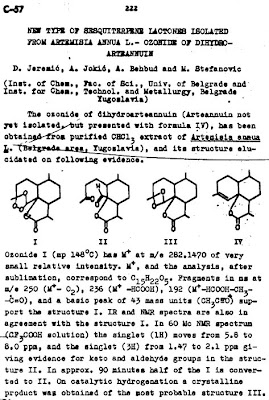 This first scientific paper is a real bombshell. The drug was not discovered in China at all, but by a Yugoslav chemist called Milutin Stefanovic. His name has been in the frame for a few years, but no one seems to have bothered chasing him up, so that's what I did. He's now a very old man in his 80s who lives in retirement in Belgrade, and unfortunately I couldn't speak to him in person.

But a former student of his, Bogdan Solaja, who is now a Professor of Chemistry at the University of Belgrade, kindly sent me an original scientific abstract, published in 1972, which I think confirms that Stefanovic discovered the drug before the Chinese. Stefanovic didn't know it could cure malaria, and I think he probably studied it because of Soviet claims about the antibacterial properties of a herb called Artemisia annua. A. annua contains artemisinin in quite large amounts.

But that's not the point here, so I give you a scanned version of the original abstract, presented at the Eighth International Symposium on the Chemistry of Natural Products, held in New Delhi, India, 6-12 February 1972.

Stefanovic got the chemical structure a little wrong, but in my opinion he's describing artemisinin. How this relates to the Chinese discovery of the drug, well that's something I'll be discussing over the coming months.
Posted by William Burns 江威廉